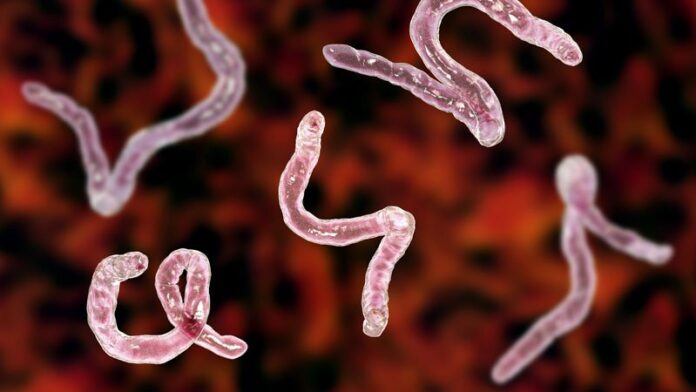 The idea of hookworms may gross you out, but that kind of gut parasite may help people ward off inflammation and other illnesses that accompany aging, a new study says.

Perhaps, the researchers say, it would be a good idea to introduce these parasites back into humans in a therapeutic way to slow aging and offer protection against heart disease and other ailments.

The study, published in eLife, looks at the value of “old friend” parasitic helminths, worms that live — often harmlessly — in the intestines of humans and animals.

Modern sanitation and health measures have drastically cut down on the number of helminths found in developed societies. People with heavy infections of soil-derived helminths can suffer many health problems, such as abdominal pain, diarrhea, blood and protein loss, rectal prolapse, and physical and cognitive growth delays, the CDC says.

The researchers, Bruce Zhang and David Gems, PhD, of the Institute of Healthy Ageing at University College London, say a decline in these microbes in developed nations has been linked to inflammatory illnesses such as asthma, atopic eczema, inflammatory bowel disease, multiple sclerosis, rheumatoid arthritis, and type 1 diabetes.

Those conditions are rarely found in undeveloped nations — where people have guts teeming with parasites.

“A further possibility,” the researchers wrote, “is that loss of old friend [gut parasites] also increases the sterile, aging-associated inflammation known as inflammaging.”

They define inflammaging as “systemic, low-grade inflammation that increases with age, independent of attack by infectious pathogens.” In that way it differs from regular inflammation, which is a natural body response to infection and injury and is needed for healing.

Inflammaging can damage your arteries, organs, and joints and lead to a host of age-related chronic illnesses, including heart disease, blood vessel disease, diabetes, obesity, cancer, Alzheimer’s, and perhaps even the severe symptoms of COVID-19, the study says.

That leads the authors to ask: Could worm infections provide broad protection against age-related disease?

That could be accomplished through intentional infection, which has worked in experiments with rats. But there may be another way to accomplish the same goals, the authors say, without making anyone ingest worms. They say that helminth-derived proteins “seem likely to yield safer and more precisely targeted therapeutics and are certainly more palatable.”

The researchers say more experiments on the effect of helminth parasites on aging are necessary.

“It goes without saying that improvements in hygiene and elimination of helminth parasites have been of incalculable benefit to humanity,” Zhang and Gems write in their conclusion. “In the wake of successes during the last century in eliminating the evils of helminth infections, the time now seems propitious to explore further their possible benefits, particularly for our aging population — strange though this may sound.”