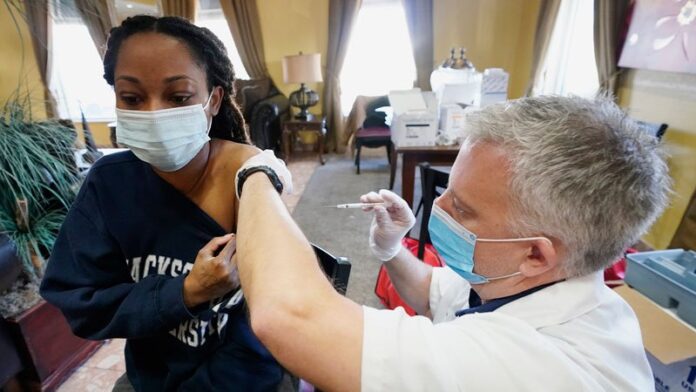 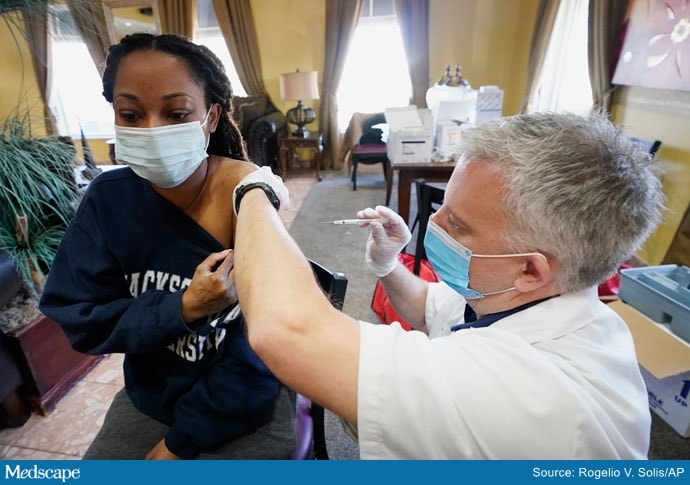 ATLANTA (AP) — The coronavirus vaccines have been rolled out unevenly across the U.S., but four states in the Deep South have had particularly dismal inoculation rates that have alarmed health experts and frustrated residents.

In Alabama, Georgia, Mississippi and South Carolina, less than 2% of the population had received its first dose of a vaccine at the start of the week, according to data from the states and the U.S. Centers for Disease Control and Prevention.

As in other parts of the country, states in the South face a number of challenges: limited vaccine supplies, health care workers who refuse to get inoculated and bureaucratic systems that are not equipped to schedule the huge number of appointments being sought.

But other states have still managed — at their best — to get the vaccines into the arms of more than 5% of their populations.

Though it’s not clear why the Deep South is falling behind, public health researchers note that it has typically lagged in funding public health and addressing disparities in care for its big rural population.

“When you combine a large percentage of rural residents who tend to be the hard-to-reach populations and have lower numbers of providers with trying to build a vaccine infrastructure on the fly, that’s just a recipe for a not-so-great response,” said Sarah McCool, a professor in public health at Georgia State University.

In Georgia, the state’s rural health system has been decimated in recent years, with nine hospital closures since 2008, including two last year. Local health departments have become the primary vaccine providers in some locations, as officials work to add sites where doses can be administered.

See also  Nearly one billion people in Africa to be protected against Yellow fever by 2026 | Nutrition Fit
See also  What Order Do Baby Teeth Come In?

“If we’re the only game in town, this process is going to take a long time,” Lawton Davis, director of a large public health district that includes Savannah, said at a news conference on Monday.

The district had to stop taking appointments in the face of an onslaught of requests after Georgia opened up the vaccine to people over 65. Other health districts in the state saw their websites crash.

Alabama and Mississippi have also been hit hard by rural hospital closures. Seven hospitals have shut down in Alabama since 2009 and six in Mississippi since 2005, according to researchers at the University of North Carolina’s Sheps Center. Alabama, Georgia and Mississippi ranked in the bottom five of U.S. states in their access to health care, according to a 2020 report from a not-for-profit foundation connected to insurance giant UnitedHealth.

But overall, experts say it’s too early in the vaccine rollout to draw conclusions about the region’s shortcomings, and they can’t easily be attributed to a particular factor or trend.

“We’re sort of building this plane as we’re flying, and there are going to be missteps along the way,” said Amber Schmidtke, a microbiologist who has been following vaccine dissemination in the South.

Officials in the individual states have cited a number of challenges, but have also acknowledged shortcomings.

“We have too many vaccines distributed that are not in arms yet,” said Mississippi Gov. Tate Reeves, who noted that some hospitals in the state are not using their vaccine doses. He said that practice “has to stop.”

Georgia Gov. Brian Kemp cited a similar challenge and warned providers holding on to vaccines that the state would take their unused doses even if that required “firing up” his pickup truck and doing it himself.

See also  What Order Do Baby Teeth Come In?

But in South Carolina, hospital officials say it is the state that has moved too slowly to expand access to the vaccinations, leaving them with unused doses. The state recently did offer the vaccine to those 70 and older.

Mississippi’s Reeves said one of the biggest weaknesses in the state’s vaccination system is the federal partnership with CVS and Walgreens to administer vaccinations in long-term care facilities. The pharmacy chains have been slow in hiring enough people to do the work in Mississippi, the governor said.

CVS Health said in a statement that it has “the appropriate resources to finish the job” at long-term care facilities. Walgreens did not respond to an email.

During an online forum hosted by Jackson State University in Mississippi on Thursday, U.S. Surgeon General Jerome Adams, who is Black, noted the reluctance of many African Americans to be vaccinated. He cited a general mistrust of medical systems stemming back to a now-defunct government study that started in the 1930s and left Black men untreated for syphilis for decades.

So far, only 15% of COVID-19 vaccinations in Mississippi have gone to Black people, who make up about 38% of the population, state health officer Dr. Thomas Dobbs said during the forum.

Officials in all four states also said some health care workers — among the first groups eligible for a vaccine — are choosing not to get inoculated. And some stressed that states were dealing with limited supplies and high demand and implored people to be patient.

“Yes, the phone lines will be busy. Yes, the websites will certainly crash,” Kemp said Tuesday. “There are simply vastly more Georgians that want the vaccine than can get it today.”

Mississippi officials said the state’s website and telephone hotline were overwhelmed after the governor announced Tuesday that vaccinations were available to people 65 or older or people who have underlying medical conditions.

Liz Cleveland, a 67-year-old retired state employee who lives in Jackson, waited hours on the website using her cellphone, computer and tablet only to encounter unknown errors.

See also  Is Faking an Orgasm Ever a Good Idea?

“It’s like gambling. You may hit or you may bust,” Cleveland said.

About 2 a.m. Wednesday, she was finally able to book appointments for herself and her husband next week in Hattiesburg, which is 90 miles (145 kilometers) away. Mississippi officials said Thursday that they will open an additional drive-thru site for vaccinations soon in the state’s largest county.

Alabama officials also have been inundated with requests for appointments since announcing the state will begin vaccinations for people over 75 next week. A state hotline received more than a million calls the first day it was open.

Celia O’Kelley of Tuscaloosa said she couldn’t get through to anyone to get an appointment for her 95-year-old mother.

“I am scared because Tuscaloosa is a hot spot,” she said.

Newspaper is your news, entertainment, music fashion website. We provide you with the latest breaking news and videos straight from the entertainment industry.
Contact us: [email protected]