The fifth consecutive week with a decline has the number of new COVID-19 cases in children at its lowest level since late October, according to a report from the American Academy of Pediatrics and the Children’s Hospital Association. 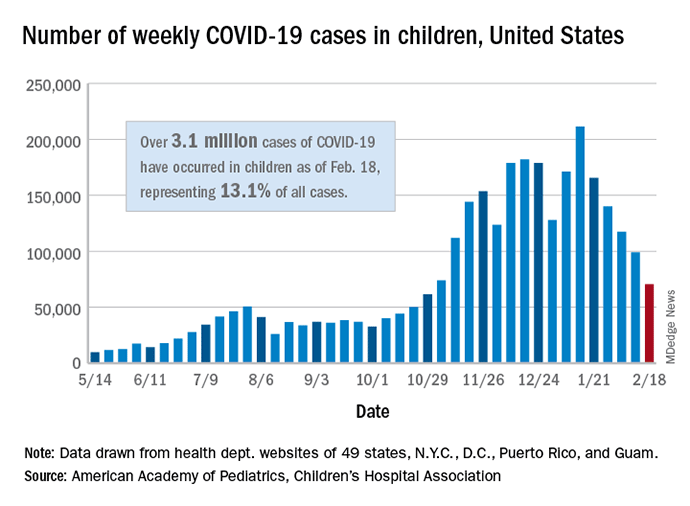 The cumulative number of COVID-19 cases in children is now just over 3.1 million, which represents 13.1% of cases among all ages in the United States, based on data gathered from the health departments of 49 states (excluding New York), the District of Columbia, New York City, Puerto Rico, and Guam.

Proportionally, the children of Wyoming have been hardest hit: Pediatric cases represent 19.4% of all cases in the state. The other four states with proportions of 18% or more are Alaska, Vermont, South Carolina, and Tennessee. Cumulative rates, however, tell a somewhat different story, as North Dakota leads with just over 8,500 cases per 100,000 children, followed by Tennessee (7,700 per 100,000) and Rhode Island (7,000 per 100,000), the AAP and CHA said.

Deaths in children, which had not been following the trend of fewer new cases over the last few weeks, dropped below double digits for the first time in a month. The six deaths that occurred during the week of Feb. 12-18 bring the total to 247 since the start of the pandemic in the 43 states, along with New York City and Guam, that are reporting such data, according to the report.