New COVID-19 cases in children continue to drop each week, but the total number of cases has now surpassed 3 million since the start of the pandemic, according to a report from the American Academy of Pediatrics and the Children’s Hospital Association. 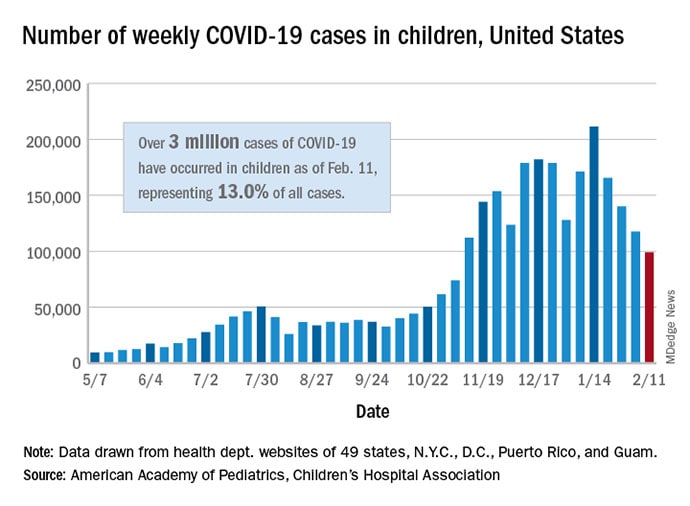 There were just over 99,000 new cases reported during the week of Feb. 5-11, the lowest number since early November and the fourth consecutive week with a decline. It was still enough, though, to bring the total to 3.03 million children infected with SARS-CoV-19 in the United States, the AAP and the CHA said in their weekly report.

The nation also hit a couple of other ignominious milestones. The cumulative rate of COVID-19 infection now stands at 4,030 per 100,000, so 4% of all children have been infected. Also, children represented 16.9% of all new cases for the week, which equals the highest proportion seen throughout the pandemic, based on data from health departments in 49 states (excluding New York), the District of Columbia, New York City, Puerto Rico, and Guam.

There have been 241 COVID-19–related deaths in children so far, with 14 reported during the week of Feb. 5-11. Kansas just recorded its first pediatric death, which leaves 10 states that have had no fatalities. Texas, with 39 deaths, has had more than any other state, among the 43 that are reporting mortality by age, the AAP/CHA report showed.

Newspaper is your news, entertainment, music fashion website. We provide you with the latest breaking news and videos straight from the entertainment industry.
Contact us: [email protected]