After declining for 8 consecutive weeks, new cases of COVID-19 rose among children in the United States, according to the American Academy of Pediatrics and the Children’s Hospital Association. 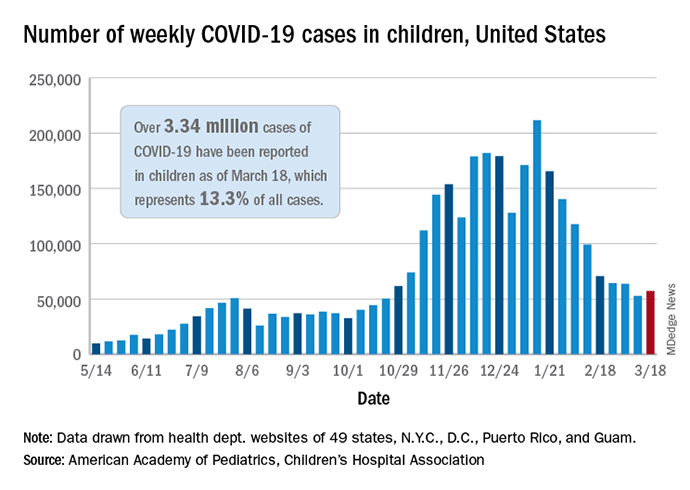 A total of 57,078 new cases were reported in children during the week of March 12-18, compared with 52,695 for the previous week, ending a streak of declines going back to mid-January, the AAP and CHA said in their weekly COVID-19 report.

Also up for the week was the proportion of all cases occurring in children. The 57,000-plus cases represented 18.7% of the total (304,610) for all ages, and that is the largest share of the new-case burden for the entire pandemic. The previous high, 18.0%, came just 2 weeks earlier, based on data collected from 49 states (excluding New York), the District of Columbia, New York City, Puerto Rico, and Guam.

At the state level, Vermont has now passed the 20% mark (20.1%, to be exact) for children’s proportion of cases and is higher in that measure than any other state. The highest rate of infection (8,763 cases per 100,000) can be found in North Dakota, the AAP/CHA data show.

There were only two new coronavirus-related deaths during the week of March 12-18 after Kansas revised its mortality data, bringing the total to 268 in the 46 jurisdictions (43 states, New York City, Puerto Rico, and Guam) that are reporting deaths by age, the AAP and CHA said.