Two months after the transplant, Jackie Dennis, a teacher in New Boston, said she’s doing well. She and the medical team at Henry Ford Health System shared her remarkable story with 4-month-old Mia Rose in her arms.

“I feel actually pretty normal,” Dennis, 31, said. “Things are still a little hard, maybe taking too many steps, going up and down the stairs. But generally speaking I can do almost everything I want to besides picking up Mia just yet.”

Dennis was 36 weeks pregnant on Nov. 20 when she went to the emergency room with a cough, headache and breathing problems. She tested positive for the coronavirus and was admitted to the hospital. 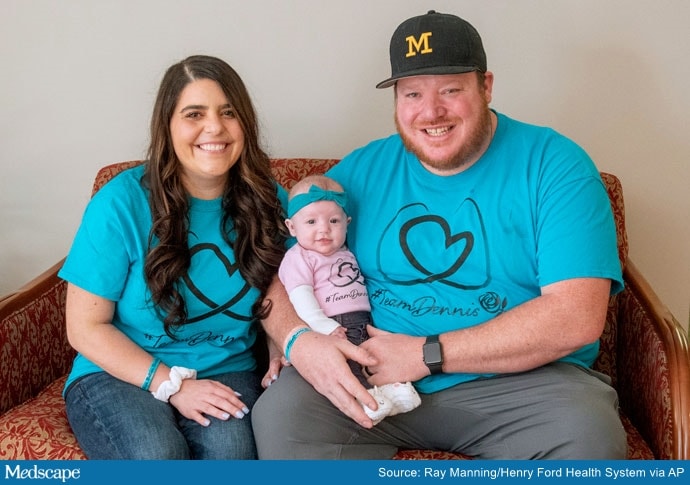 Jackie Dennis, left, and her husband, Ricky Dennis, pose for a photo with their daughter, Mia Rose, at Henry Ford Health System in Detroit.

Doctors decided to induce labor a week later, and Mia was born. Dennis developed pneumonia and her lungs deteriorated to the point where a ventilator was necessary. She was subsequently placed on another special breathing device but her lungs weren’t improving.

“There’s really no words you can put to it, right?” said Dennis’ husband, Ricky. “Your wife’s fighting for her life, and you have a new baby at home. It was tough.”

A double lung transplant was performed on Jan. 16.

“Her lungs were completely destroyed by this inflammatory response to the virus, and without transplant she would not have been able to be alive,” said Dr. Lisa Allenspach, medical director of the Henry Ford lung transplant program in Detroit.

“Her situation was probably as severe as anyone that we transplant,” Allenspach said.

The doctor said the number of COVID 19-related lung transplants is low in the U.S.

“We expect that she should be able to return to work, to do things that she wants to do. Long-term survival is really very, very possible and likely,” Allenspach said.